There is nothing us Singaporeans love more than stuffing our faces silly. So much so, that it has become a national past time.  One of the main reasons for that is because Singapore is home to a vibrant food scene which comes as a result of our varied ethnic make-up. You need not look far to witness it, just head on over to the nearest hawker center – an establishment which I dare say is unique to Singapore. There is something from and for everyone in the good ol’ hawker centre. Food from every creed and race is available in this congregation of thoroughfare. For this article, we shall focus on food of the Malay and Indian variety, or more specifically, Indian Muslim cuisine, which is the lovechild of Malay and Indian influences combined!

Malay food is often characterized by its generous use of fragrant spices and coconut milk – which gives the dishes its distinct ‘lemak’ (creamy) textures and flavors. Malay food is known for being very flavorful, be it savory or sweet. Another thing about Malay cuisine you should know is that, it is often spicy! Malays are known for their love of chili. So it is best you have a glass of milk handy when indulging in certain Malay Food.

Indian cuisine is known and loved around the world. What is lesser known though is their much more Singaporeanized/ Malaysianized (I just made that word up) counterpart which is the Indian Muslim cuisine or more commonly known round here as ‘Mamak’cuisine. Just like any typical Indian cuisine, it centers heavily on the use of spices such as turmeric, coriander, cumin and cinnamon. Like its Malay counterpart, it is also very spicy! Indian Muslim cuisine always packs a punch no matter what it is. 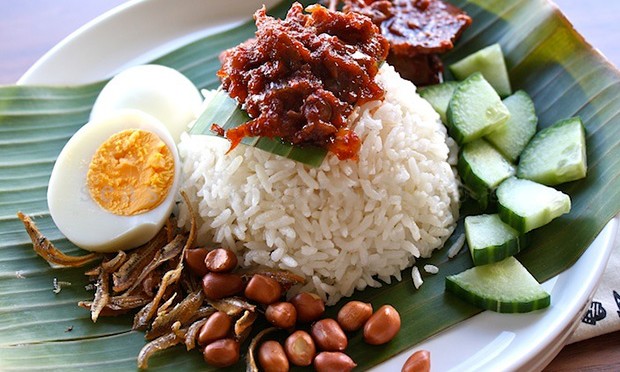 The primary component in Nasi Lemak, or Creamy Rice in Malay, is the rice which is cooked in coconut milk, lending it a creamy and smooth flavor. Commonly served with fried anchovies, fried egg, fried fish or chicken, and fried peanuts (that’s a lot of fried stuff!) with a spicy sweet sambal (chili sauce) at the side, it is one of the most widely available breakfast dish in Malay food stalls everywhere. 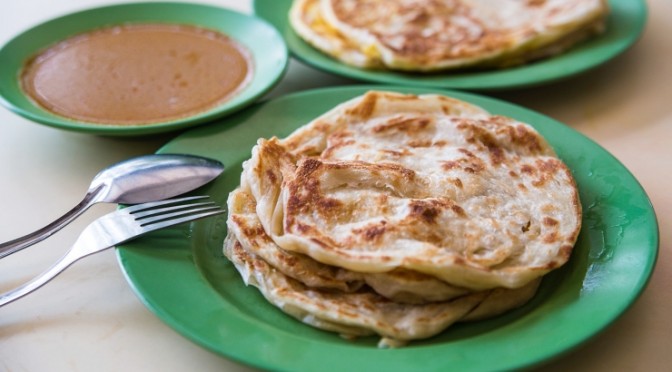 Roti Prata is a simple Indian Muslim dish that can lay claim to the title of ‘Singapore’s most famous comfort food’. Everyone can relate to having Roti Prata for breakfast. It is simple, delicious and filling. Roti Prata is basically fried dough and it is served dipped in either curry, sugar or eaten by itself.  Roti prata has evolved over the years with varieties such as the simple Egg or Onion Prata to the extravagant Ice-Cream Prata. One popular way is to pour the curry on top of the prata, letting it soak further intensifying the flavors of both the Curry and the Roti Prata. 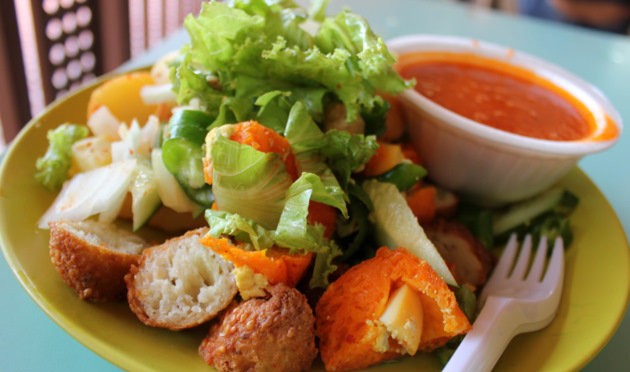 This is more of a platter than an actual dish. Indian Rojak is a salad made up of savory cooked ingredients such as fish cakes, sausages, fried dough, potatoes, cuttlefish with garnishes of green chilies and onions served up with a sweet and mildly spicy peanut sauce the deepest shade of red you’ll ever see. I recommend you share this with friends. 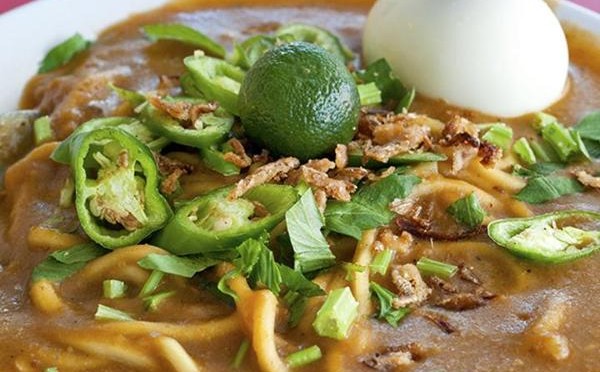 Mee Rebus, literally ‘Boiled Noodles’ is another malay breakfast dish consisting of yellow egg noodles in a sweet and mildly spicy brown gravy. Typical of Malay cuisine, it is rich and very flavorful and that flavor can be further enhanced by squeezing some lime juice into the mix. Other than boiled eggs, I especially like the fact that green chilies and beansprout are added into the mix, giving the dish a nice crunchy texture. 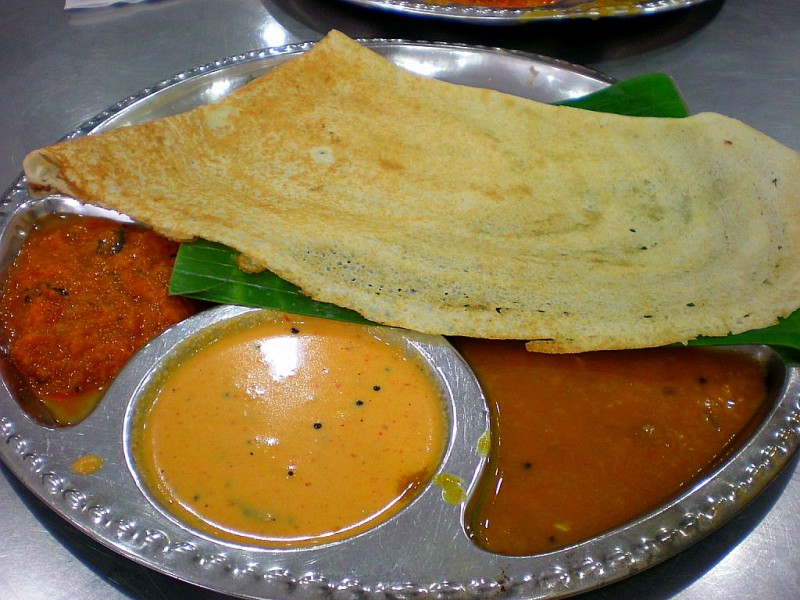 Dosa, or more commonly known ’round these parts as Thosai is another one of Indian Muslim’s ‘tear-and-dip’ dishes. Made from rice batter and lentil it is not unlike a crepe in appearance and texture. Served in a stainless steel platter with 3 types of gravy dips all neatly compartmentalized.  If your appetite is of the voracious variety then I suggest ordering the Masala Thosai which is Thosai stuffed with spiced potatoes – my personal favorite. Other varieties are available such as the Egg Thosai or the eye-catching Paper Thosai. 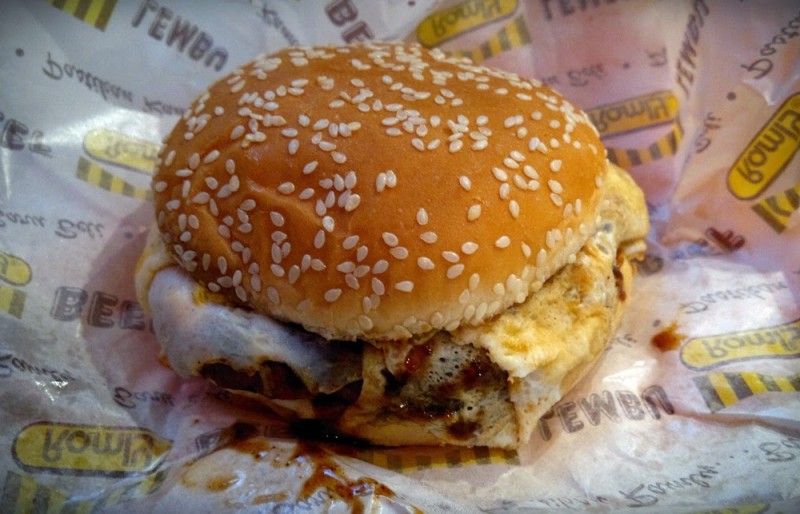 Although burgers are usually associated with Western Cuisine, the good ol’ Ramly Burger has made itself out to be a very local and Malay treat. Ramly Burger is founded by Dato’ Haji Ramly Bin Mokni and is a mainstay at Singapore’s popular nomadic Pasar Malam (Night Bazaars) and it has gone from strength to strength ever since its introduction from our Malaysian Neighbours. Again we see the heavy use of spices in Malay Cuisine with pepper and sauces such as mayonnaise, chili sauce and BBQ sauce applied in abundance. Ramly Burgers also come it’s ‘Ramly Burger Special’ variety which is a Ramly patty wrapped in a thin omelette in between two buns – heavenly. 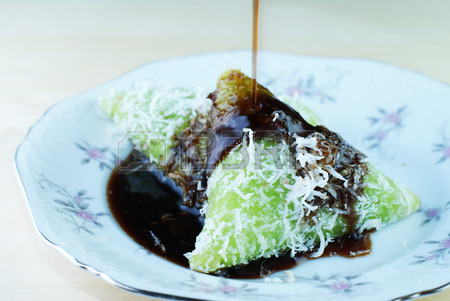 Not to be confused with the Kueh Lapis, Kueh Lopis is a triangle shaped confectionery made out of glutinous rice glazed with thick brown sugar syrup and sprinkled with coconut shavings. The Kueh Lopes is usually eaten for breakfast or as dessert and it is a favourite among kids for its sweet flavor and interesting appearance. 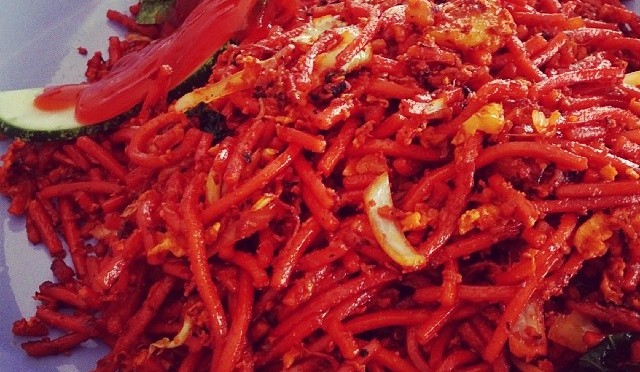 Mee Mamak is a loose term for fried noodles cooked in a secret sauce that gives it its familiar striking red color. Different types of noodles can be used mainly the yellow egg noodles, the thin rice vermicelli, the flat white Kway Teow noodles or the springy ramen noodles. The more generous stalls offer bits of potatoes and minced meat in the noodles but usually it comes with cabbage, beansprouts and onions. It is a rather simple dish but with a very powerful savory flavor profile.

Murtabak is a very hearty meal best shared with a friend. It is basically a very large rectangular piece of prata dough, fried and stuffed with minced meat and onions in between. It is also served with curry and sliced cucumber soaked in tomato sauce. This Indian Muslim dish is very popular during the fasting month of Ramadan. 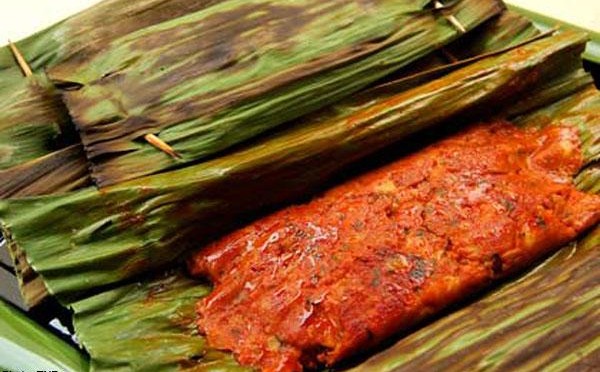 Otak-Otak or sometimes Otah, is a popular snack to have in Singapore. Otak means brains in Malay due to it’s resemblance (at least the locally uncommon white version of it) to brain matter.  Otak-Otak used to be sold by nomadic street hawkers using traditional mobile grills and it is still done so all over Singapore. This dish is made up of fish paste, tapioca starch and spices wrapped up in banana leaf where it is then grilled. Beware though, this dish can get really addictive despite of it spiciness. 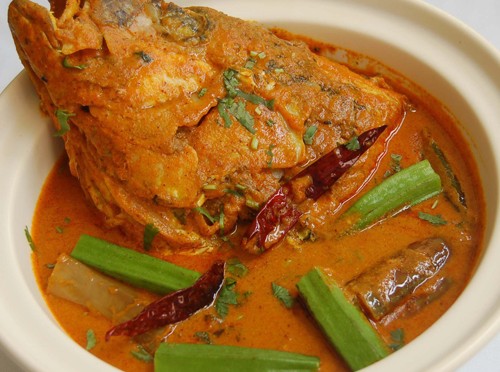 Fish Head Curry is an Indian dish that is invented in Singapore when a chef by the name of M.J. Gomez in his attempt to cater to his Chinese clientele – an attempt that made history! Fish Head Curry typically uses the head of a red snapper along with ingredients such as lady’s fingers, tomatoes and eggplant. Usually served in big claypots, this is a weekend treat most families look forward to. 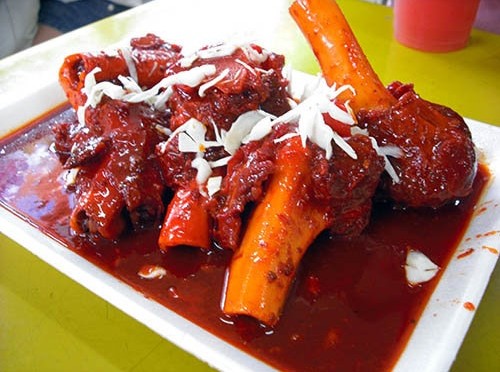 Sup Tulang (Bone Soup) can be considered both a Malay and and Indian Muslim dishes with both camps having their own special interpretations of it. Malay Sup Tulang is cooked in a clear herby broth while the Indian version is in a thick red gravy. Both though are best served with bread. The climax to eating Sup Tulang is the attempt at trying to shake the marrow loose from the bone – it is tough work but so worth it in the end.

Since you’re here, why not watch a video about a guy who lodged a Police report here in Singapore because he was friendzoned? Seriously. Here, watch it and do remember to share it (and also subscribe to Goody Feed YouTube channel)!

Don’t forget to get cashback when you shop online with ShopBack. Readers of goodyfeed.com can get an exclusive $10 BONUS, including $5 sign up bonus and $5 bonus with your first ShopBack order. So visit ShopBack now!