With Halloween just ’round the corner this October, get into the mood with these chilling and suspenseful books from Book Depository. Delve into the dark realms of disappearing people, crazed stalkers, unusual suicides and straight up peculiar and unexplainable activities. Be careful to make sure that no one is watching you.

End of Watch by Stephen King

Written by one of the best horror writers of all time, End of Watch features a retired detective, Bill Hodges, drawn into a recent spree of suicides. These suicides seem to have a connection with a notorious criminal, Brady Hartsfield, that Hodges had previously encounterd. The plot-twist is that Hartsfield has gained physic abilities that he uses to wreck havoc. Join Hodges and his sidekick, Holly Gibney, in this heart-pounding suspense novel.

Appointment with Death by Agatha Christie

Among the red cliffs of Petra lies the corpse of Mrs Boynton, a sadistic tyrant who dominated her family. The only clue to her fatal death was a tiny puncture mark on her wrist. Belgian detective Hercule Poirot claims that he can solve the mystery within twenty-four hours simply by interviewing the suspects. However, with conflicting statements given by family members, Poirot establishes a timeline that seems impossible. Read to find out if Poirot can solve this mysterious case or not.

Behind Closed Doors by B.A. Paris 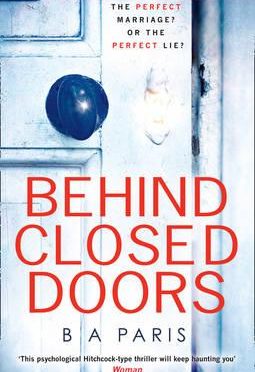 Behind Closed Doors revolves around the lives of a seemingly perfect couple, Jack and Grace. Jack and Grace are always together – they are practically inseparable. True love? Or is it a mere facade and with more that meets the eye? This is a chilling thriller that will keep you racing through the pages to find out the fate of this couple.

The Girl on the Train by Paula Hawkins

The Girl on the Train features a first-person narrative told from the point of view of three women: Rachel Watson, Anna Watson and Megan Hipwell. One day, Rachel sees something shocking that changed these three women’s lives altogether. Read the gripping accounts of these three women that are bound to keep you up through the night.

Nick and Amy Dunne have always presented a portrait of blissful marriage to the public. However, on the couple’s fifth wedding anniversary, Amy goes missing. Hidden secrets behind their marriage are slowly being revealed. Marriage is not always picture-perfect as it seems in this psychological thriller.

Before I Go To Sleep by S.J. Watson

What if the memories that you create every day are lost every time you went to sleep? Your identity, your past, the people you love – all forgotten overnight? And the one person whom you are forced to trust, is only telling you one side of the story? Before I Go To Sleep features protagonist Christine Lucas waking up in the bed every single day with completely no recollection of what happened the day before. With a suspense-invoking plot, read this book to find out how Christine journals her daily routine and tries to figure out what actually happened to her.

With ShopBack, you can enjoy 2.5% cashbook on these books, so hurry and grab these nail-biting and suspense thriller books here at Book Depository today!

All images were sourced from bookdepository.com unless otherwise stated.