Why Do Mosquitoes Buzz in People’s Ears?

We all hate mosquitoes, don’t we?

Not only do they suck your precious blood and pass you some diseases such as malaria or dengue while they are at it, they also make this annoying buzzing sound beside your ear before they attack.

But have you ever wondered why do mosquitoes buzz in people’s ears?

Why Do Mosquitoes Buzz in People’s Ears?

Before we move on, let’s get some facts straight. One, it is the female mosquito that buzzes around your ear, not the males because the males do not take blood; only the females do. Two, the buzzing sound is made by them when they flutter their wings very fast, as fast as 250 times per second!

But have you wondered why they always do that buzzing routine? Like if you mozzies want to attack us, at least don’t make it so obvious!

Jokes aside, there is actually some scientific research done on this issue and there is a result even though it might not be 100% reliable.

We tried interviewing a mosquito but it refused to go on the record, so this should suffice.

Basically, the main reason why they like buzzing around your ear so much is that they are attracted to the smell. You see, with the exception of our belly button, our ear is one of the dirtiest places in our bodies, especially the insides of the ear.

If the ears are not cleaned regularly, they form ear wax, which emits a smell that mosquitoes love, thus they will tend to go for that smell.

There is also another theory: they do so because they are attracted to the carbon dioxide which you emit when you exhale, and where is carbon dioxide exhaled from your body?

No, the nose or mouth. But they’re close to your ears, aren’t they?

Another theory suggests that the buzzing sounds are for mating purposes, where the female mosquito buzzes to attract the male mosquito to mate. Again, this theory is also not supported any research yet.

Now that we know it is our ear wax that caused this issue, so what can we do? Well, I can only say that other than cleaning your ear regularly with cotton buds to remove any ear wax, you can do all the regular mosquito prevention techniques, such as mosquito coil; blowing the fan against your face; having a cool environment; mosquito repellent patch; the 5-step mozzie wipe-out (Singaporeans will know).

Also, to understand why mosquitoes prefer some people’s blood, watch this video to the end: 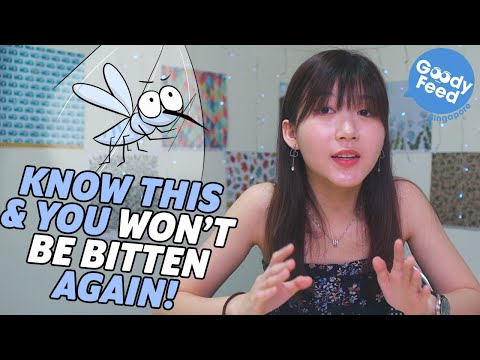