Can Maggie Mee That’s Cooked with Just Hot (Not Boiling) Water Be Eaten? We Tried for You

That’s right. No stove; no fire. Just dump your pack of Maggi Mee into a bowl, ladle all that sizzling hot water over it and cover it up.

2-3 minutes later, you’re done and ready to tuck in.

Sounds simple? It is. The question though is whether it’s okay to do it this way.

In other words, cooking it just makes it more palatable, therefore it’s all just about the taste. In fact, you can even use a microwave oven to cook your Maggie Mee if you want!

After all, didn’t many of us who has been through NS in the army cook our Maggi Mee this way? We’re all still alive, aren’t we?

So now that the old wife’s tale is out, here’s the trickier question: how does it taste?

(Got to fill it with hot, hot water first!)

So… how does it taste?

Surprise, surprise! It actually tastes decent! If we had prepared a bowl of stove-cooked Maggi Mee alongside this one, we wouldn’t have been able to taste the difference!

So what’s the final verdict?

YEP, it’s okay to just cook it with hot water and eat it! Just make sure that the water is legitimately ‘hot’ though! You don’t want to end up with under-cooked Maggi Mee!

And if you’re still worried about any health hazards, just remember that you’re eating instant noodles.

It’s MEANT to be unhealthy.

Want to be super safe? Have some salad instead.

In the meantime, you can watch this video on the 10 facts about instant noodles (and please subscribe to our YouTube channel for more informative videos): 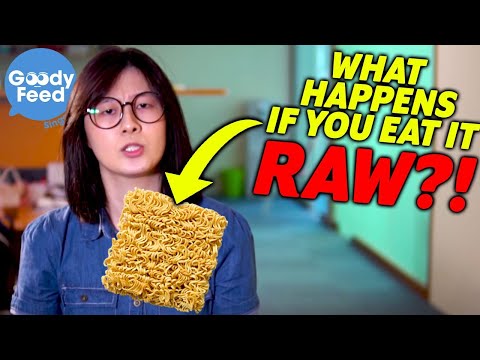