Mr Coconut is all the rage nowadays, and for good reason too. After all, its Coconut Shakes are, for lack of a better descriptive phrase, the bombz.

Though of course, the recent rumour, which “stipulates” that coconut shakes could actually relieve side effects from COVID-19 vaccinations, certainly helps too.

But nevertheless, that leads to the almighty question: is a coconut shake healthier than its bubble tea counterpart as a whole?

Or could it actually be worse?

To save the health of the society, we set forth to find out.

If you’d like to watch a video about this topic instead, here’s one we’ve done: 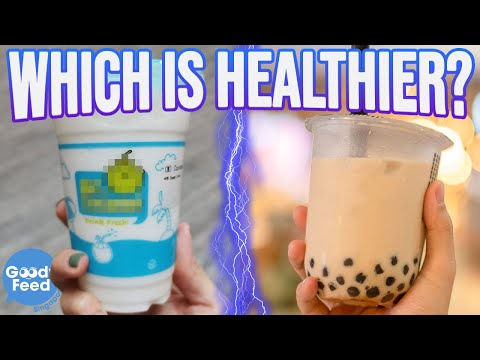 Now, here’s a brief clarification before we start:

Coconut water does not equate to coconut shakes.

After all, coconut water itself is actually similar to the holy grail in the F&B context. Low in calories, it’s also naturally free of fat and cholesterol. Plus, it has more potassium than four bananas, and it’s super hydrating.

“How super is super?” you may ask.

Well, let’s just say that it could actually replace water better than your go-to 100-Plus or H20 sports drinks. It’s that superb.

And for the record, 500 ml of coconut water would only entail around 100 calories.

To be specific, a cup (500ml) of 100% coconut water should contain the following nutrients:

Talk about the perfect thirst-quencher.

But here’s the thing. That’s coconut water. 100% coconut water with no sugar added, and with no additional ice-cream topping.

The same logic does not apply to coconut shakes.

Essentially made of coconut water, coconut flesh and perhaps even ice-cream, the caloric content of a shake is significantly higher than its pure coconut counterpart.

The sugar content, too, leaves little to no room for error. In the worst instances, it could blow your daily sugar intake right out of the water.

Indeed, coconut shakes boast a large amount of saturated fat, and could lead to cardiovascular disease in the long run.

Here’s the rough nutritional board for a serving of original coconut shake (500ml):

It can be more if you’ve a very, very sweet tooth.

So… Are They Worse Than Bubble Tea Or What?

Well, that would largely depend.

See, bubble tea actually has around 300 calories as well, but the “toxicity” of the drink would vary according to how you customise your drinks. For instance, if you ask for 0% sugar, refuse the milk and remove the pearls, you would have a drink that entails lower calories than the “norm”.

Fortunately, that method works for coconut shakes too. Ask for 0% sugar wherever possible; obstruct the person from planting a scoop of ice-cream into your shake; do not ask for an upsize.

If you comply with these given steps, you can be assured of a somewhat healthier coconut shake: one that would not give you health complications in the long run.

Reader Bao: But that won’t be a coconut shake. It’ll be—

Alternatively, you can also make one yourself with the following ingredients:

You can view a rough preparation process here. And do take note that if it doesn’t feel “shiok” enough, you can always add some fruits to “spice” it up!

If you do it correctly, you should get a self-made coconut shake that entails the following nutrients:

And of course, you can always get 100% coconut water in supermarkets. Just make sure that there’s no added sugar inside.

Well, at least so far, there has actually been no data to back that notion up.

For instance, there is no evidence that coconut water can mitigate chances of fever post-vaccination.

Well, let’s just say that you’ll be alright with a bubble tea too.

In the meantime, excuse me as I head over to Mr Coconut for my daily coconut fix.