Looks like Singapore is back to having no locally-transmitted cases. As of 12pm today (12 Apr), the Ministry of Health...
Read more

The only thing worse than stepping into a pile of dog poo with your pristine Nike Air Force 1’s...
Read more

Luxury cars may be a sight to behold most of the time, but it appears that when push comes...
Read more

For reasons we don't yet know, there are certain things you can get away once you're above the age...
Read more

The Catholic Church in Singapore has investigated accusations of sexual misconduct between a former altar server and multiple underage...
Read more

In the last few years, mala stalls have popped up in almost every coffeeshop, and people have been flocking to these stalls in droves, throwing Yusof Ishaks at the stallholders.

And it’s therefore no surprise that McDonald’s isn’t going to let those uncles in white T-shirt earn all the dough.

Today, McDonald’s releases the Mala Shaker fries, and from the headline, you should know that they’ve learned their lessons from their salted egg yolk loaded fries.

Before anything, here’s a disclaimer: I’m not a mala fan, and the only times I’ve mala are with my colleagues when they kept on emphasizing how goody it is, when all it did was to burn my tongue and make my lips feel bigger.

However, I don’t hate it per se; it’s merely another dish that I’ll have only if it was the only option.

For a start, we didn’t expect to order the fries from GrabFood; after all, when the Samurai Burger and seaweed shaker fries were released, long queues were formed in almost all McDonald’s outlets and trying to order McDonald’s from GrabFood is akin to trying to travel overseas in 2020.

So it’s a surprise when we could order it this afternoon; what’s even more shocking is that as of now, 4 out of 6 outlets near our office are still available for order in Bukit Batok.

I guess mala doesn’t have the same appeal as seaweed fries.

Here’s the little package that makes all the difference: 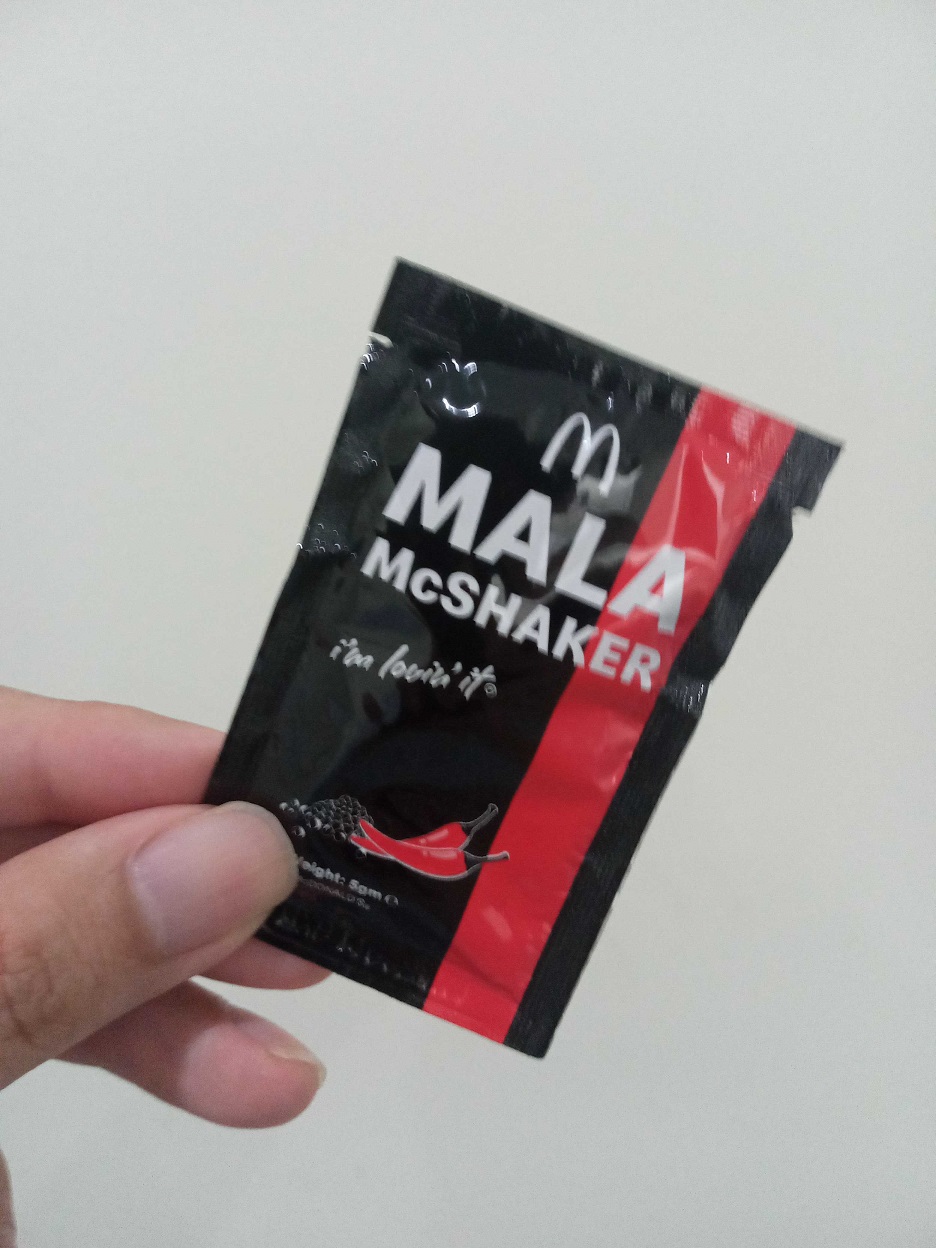 It looks innocent enough, and upon opening it, it smells like the powder for a pack of Curry Maggie Mee. Upon smelling the package, I was convinced that I was going to waste my calories on yet another honey mustard fr—I mean, salted egg yolk loaded fries. 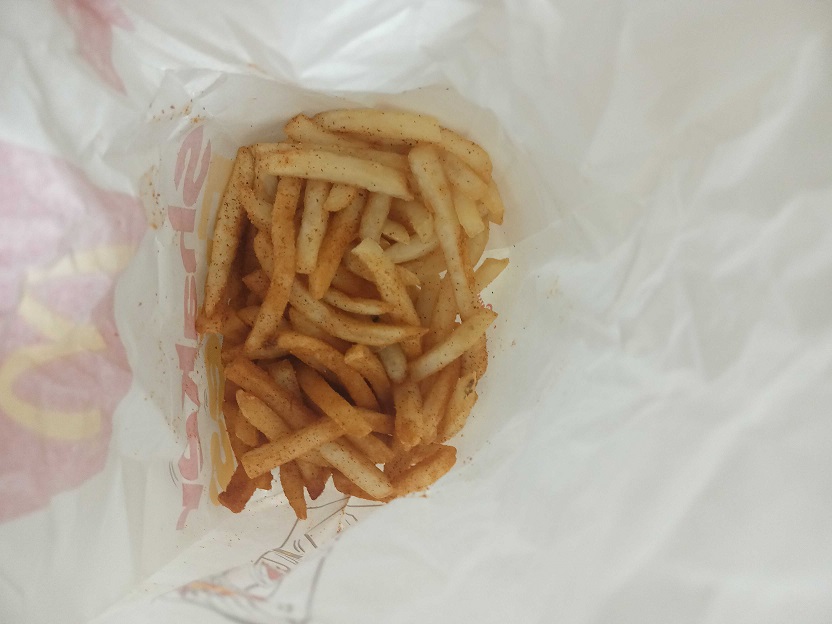 The mala game only started when I take a bite of this little hot potato. 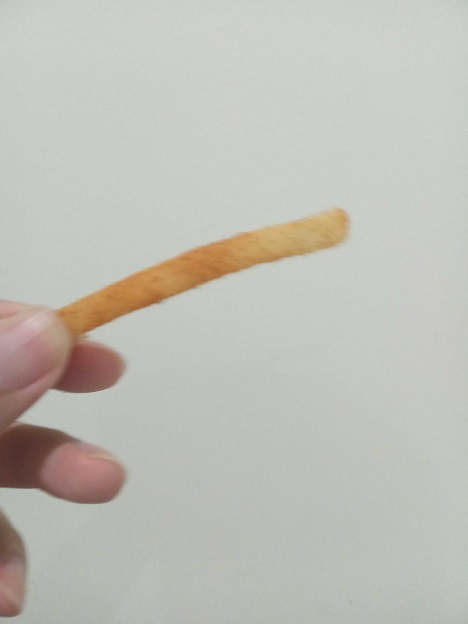 And when I said little hot potato, I meant it; all it took was just one piece of the fries, and a few seconds later, my tongue was numbed.

It was so salty that I felt like I’ve hit my daily sodium intake with that little potato, but I decided to leave all health advices to 2021 immediately because the numbing sensation is so authentic and almost addictive, I suddenly felt in love with the clown in yellow.

Thankfully, I had Filet-O-Fish with my fries, so chances are I won’t be spending the last hour of 2020 in the toilet. My spiciness tolerance level is so-so—I can take spicy food and won’t faint, but I’ll cry if I had to bite into ten chilli padis.

So here’s a piece of advice: if you can’t take spicy food, avoid this at all cost.

But then again, you won’t be having mala if your life is so sad and boring, right?

Are you angry at someone now, and can’t get him or her out of your mind? Well, watch this video and you’ll know what to do next:

You mean people who lead sad and boring lives?

After downing everything, my tongue is numbed and my lips have turned into sausages: the exact side effects we’re willing to accept after having anything mala.

While it’s salty, the saltiness somehow makes it addictive and matches the fries well. Why didn’t anyone think of adding salt to fries, right?

Whether you’re a mala fan or just someone like me who has mala every few months, here’s the conclusion: this is a must-have, and it’s a surprise that it hasn’t generated queues in McDonald’s outlets.

Watch This If You’re Angry at Someone Now
03:49

Ugly Truth About COVID-19 Vaccine Passports No One Dares to Talk About
08:40

Know These 10 Crucial Facts About COVID-19 Vaccines Before Taking Them (Including Side Effects!)
16:18

Do you know what he’s talking about, especially the last drink? #shorts
00:17

Never get him to remove background for you #shorts
00:15