Singapore might be super wealthy; so wealthy that when we’re on “lockdown” due to COVID-19, we all make a lot of noise only when McDonald’s and bubble tea close down.

But despite that, our tiny little island doesn’t have a minimum wage system.

Instead, the closest we have to a minimum wage system is the Progressive Wage Model.

Here’s what you need to know simplified for you so that you won’t look like an idiot when Jamus Lim is fighting for it in Parliament.

But if you prefer to watch a video about this topic instead, here’s a video we’ve done for this (also, please subscribe to our YouTube channel for more informative videos!) 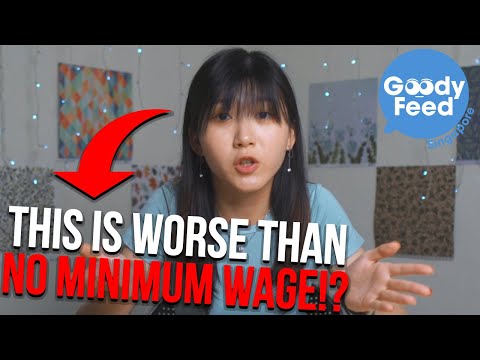 What is Minimum Wage?

Minimum wage, as the name suggests, is minimum wage lah.

For example, if there’s a minimum wage of $7 per hour, then Goody Feed cannot pay me $6 per hour.

If Goody Feed wants to pay me $6 an hour, then I can complain and the company will close down and everyone in Singapore would be happy.

This is actually implemented in many countries so that workers like us would still earn enough to buy McDonald’s and bubble tea.

Now, if it’s so helpful, and many countries are doing that, why aren’t Singapore doing that?

Actually, this debate has been ongoing for a long time even before Jamus Lim came into the picture.

But one of the key reasons is this: it might cause unemployment.

Then Goody Feed can engage more people, and our office won’t be as empty as my bank account. Many people will be employed, and we all live happily ever after.

If there is a minimum wage of $7 per hour, then Goody Feed can only engage one person for the entire company, and we’ll all be jobless.

You see, without a minimum wage system, it’ll be determined by market forces, so if Goody Feed really just pay $0.50 an hour, no one would work.

For one, if you earn $0.50 an hour, you need to work one full day before you can buy a cup of bubble tea…and it’s without pearls.

And secondly…employers can abuse the system and exploit workers.

So, Singapore has no minimum wage, but you’ve been hearing something known as Progressive Wage Model (PWM).

What the heck is that?

This rather new model, which was introduced only in 2012, is kind of like minimum wage, but customised for certain sectors.

Reader Bao: I can choose whether I want it to be spicy or—

Progressive Wage Model is like a cai png stall: you can choose your own dishes and customise it based on your needs.

This allows the authorities to customise each sector’s system instead of having a broad system.

For example, in the PWM system for the cleaning sector, there is a “minimum wage”, and it’ll increase every year.

It’s also customized for each job.

And it’ll be different for cleaners for a town council, whereby their minimum wage should be $1,442 from July 2020.

The PWM model applies only to three main sectors: cleaning, security and landscape

But why these three sectors?

Because one of key goals is for workers in these sectors to upgrade their skills.

So, is PWM considered a minimum wage system then?

You see, PWM isn’t minimum wage because firstly, it’s not a law but is still compulsory and secondly, it’s to upgrade workers’ skill so they can be paid more.

The goal is to keep the workers in the sector and let them go for courses to upgrade their skills, so they can earn more with better skills.

Still don’t get it?

Just think of it this way: imagine working in Goody Feed sucks and the pay is low because that’s the market rate determined by market forces.

But Singapore needs Goody Feed because rumours have it that bubble tea shops depend on Goody Feed for advertising, and bubble teas are essential.

So Singapore forces Goody Feed to pay a certain salary, and send people working there for upgrading skills.

With that system, there would still be people working in Goody Feed.

Just think of Goody Feed as a sector, like the security sector.

So yeah: it’s not really minimum wage but it serves the function of one.

So if you understand everything here, you’d know why it’s such a hot topic: there’s no right or wrong answer for the question, “Should Singapore have a minimum wage system?”