These days, getting a job is difficult. Not only do you have to go through multiple rounds of interviews, but you have to juggle six oranges in front of the boss as well while singing “Baby Shark”.

But these are nothing compared to what a company in Taiwan did.

The company not only made the potential employees submit their personal information diligently but they made them do an “IPPT” as well—all for a S$2,000/month job.

A company in Taiwan have managed to get applicants to run with a sandbag for a NT$40,000 job as a cleaner. Converted to SGD, that means it is about S$2,000 a month.

During the “interview”, applicants have to race with other applicants while carrying a heavy sandbag. They have to take a U-turn back at a cone at the mid-point and race back to the starting point.

While running, some applicants were spotted tripping and falling. However, they picked themselves up quickly and rushed to the end. One of the applicants even fell five times before completing the course.

Do note that this is their first round of “interviews”, as more rounds are to be expected. 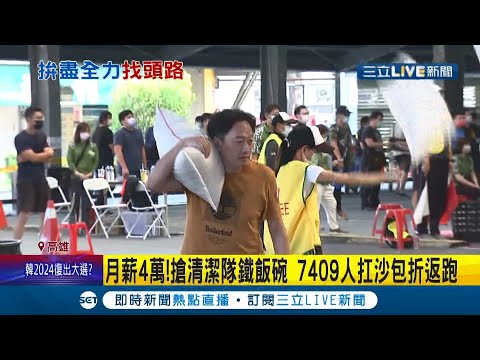 According to the video that reported the news, there were around 7,409 applicants aged between 16 years old and 64 years old. Most of these applicants ended their education route in secondary school with over 3,024 applicants in that group.

When questioned why the applicants wanted to subject themselves to such physical activity, some of them said they’ve have chosen to apply for this company because the job is stable while others were recently retired and bored at home.

Why Such an “Interview”?

This unusual “interview” is carried out as the job scope requires the employee to be fit and have a high endurance level.

Although it seemed unorthodox, the company may be able to snatch some amazing employees for some of the younger applicants was able to finish the course in around 20 seconds.

That begs the question: is the pay above average?

According to paylab, the gross monthly salary for a cleaner in Taiwan ranges from NT$14,000 to NT$33,000, so this pay range can be considered high for the job scope.