The internet is full of bored, wannabe detectives.

All you have to do is commit a misdeed on camera and 24 hours later netizens will know your dog’s name and how many times you poop a day.

Then they’ll share this private and sensitive information online in an attempt to embarrass you or shame you.

Unless you’ve been napping for the last three days, you’re probably familiar with this woman:

Yes, it’s the “Sovereign Lady”, the woman who believes the laws of a country don’t apply to her all because she declared herself a “sovereign”.

Netizens who were dumbfounded by her logic and angered by her disregard for the law shared a video of her altercation with a member of the public online, and she quickly went viral. 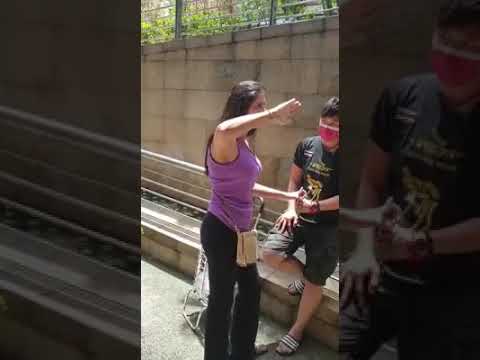 She was later arrested for not wearing a mask and assaulting a member of the public.

Wanting to shame her further, some netizens identified her as the chief executive officer of a tech company, and started sharing her name, photographs, and personal details on social media, reported The Straits Times.

Aside from it being illegal, there was one big problem with this: they got the wrong woman.

According to Mothership, Tuhina Singh, the CEO and founder of digital securities service provider Propine, was mistaken for Paramjeet Kaur, the actual “sovereign” lady.

Shortly after the first incident, Paramjeet was caught again on 3 May at the same location. Her identity was revealed when she appeared in court to face her charges on 5 May.

But it was a little too late.

Before Paramjeet even made it to court, doxxers had already published Tuhina’s personal information online.

And you’d probably be shocked to discover that this led to a string of racist and xenophobic comments against her.

The internet is so predictably bigoted.

In addition to her personal information, her interviews with SPH radio station Money FM 89.3 and a screenshot of the employees in her company were shared on the SGTalk forum, reported Mothership.

Her information was also reportedly being circulated in the All Singapore Stuff group chat on Telegram.

Both SGTalk and All Singapore Stuff have since taken down these threads.

On 6 May, Propine released an official statement in response to the mistaken doxxing.

They clarified that netizens had indeed mistaken Tuhina for the “sovereign” lady, and thanked everyone for “promptly redacting the misinformation once they uncovered the truth.”

One could argue that her information shouldn’t have been up, to begin with, but hey, we’ll take what we can get right now.

Tuhina also had some kind words for those who stood up for her and the company.

“I want to thank all well-wishers who reached out and stood up for us. Thank you for helping spread the right message. We felt deeply loved and cared for,” she said.

The statement ended with a tribute to the government and residents who are pulling together to combat the coronavirus outbreak.

In case you’re unaware, Singapore’s amendments to the law of doxxing came into effect on 1 Jan 2020.

Basically, if you share other people’s personal information such as:

With the express intent to harass, threaten, or incite violence against them, you’re breaking the law.

And since so many people are taking videos of bare-faced residents to shame them online nowadays, you should know that this is also considered doxxing because it includes:

If you see someone without a mask on, it can be a little annoying that they’re not following the law, but do they really deserve to be ridiculed, vilified, and shamed online?

More often than not, this criticism turns into verbal abuse, and can lead to bigotry.

Netizens aren’t exactly known for their rationality and restraint. And since they’re always looking for a reason to be outraged, they’ll take out all their frustrations on people who were simply caught making a little mistake.

It is, unfortunately, the nature of the internet.

So, the next time you want to share someone’s personal information, just ask yourself if they really deserve to be crucified online.

What if someone did the same thing to you?