Rust and metal are like two opposites of the same coin. You can’t have one without the other.

Ever bought a watch for $199 only for the back of the watch to rust? Despite the fact that it’s supposedly stainless steel.

Or the stainless steel toilet paper holder in your bathroom that rusts after two months.

Well, don’t be in a hurry to change watches or toilet paper holders.

We, at Goody Feed, understand your frustrations (after so many things that rusted in the office, including our old and useless boss), so here is a list of ways to remove rust from metal you couldn’t even imagine in your wildest dreams.

Say what you will about Mama Lemon, it’s good for more than cleaning your dishes.

Cut a potato into half, dip the opened end into dish-washing detergent and leave it on the rusty spot. Then, rub furiously at the rusty parts.

Watching the rust disappear will make your day.

Just note that this method only works for rust in easy-to-reach places and can get pretty messy.

The unlikeliest duo in the war against rust but what can you do? It’s all based on science.

Sprinkle salt over the rusted areas, and squeeze lemon or lime over the salt. Let it sit for a while and scrub it away with the skin of the lemon.

And the rust will disappear accordingly.

Magic? No. It’s all just science, my dearest Watson.

Here’s one natural de-rust method you can use that won’t cost you much: using vinegar.

The video shows a person using Apple Cider Vinegar but really, any white vinegar will work as well. 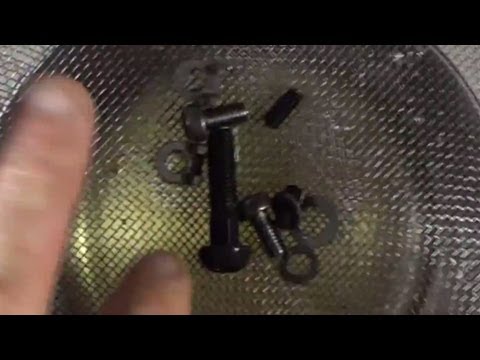 And the best part? It’s amazing for small objects you can’t scrub at with a brush, and it doesn’t require any arm strength at all.

Simply soak and shake. Not too bad, eh?

A wise old man once said that baking soda can do almost everything. He was right.

Put baking soda into a bowl and add water until you get a thick paste. Lather a generous amount of the paste on the rusty spots and let it sit for a couple of hours.

After that, use a toothbrush or a scrub to rub at the rust and it should come off as easily as A-B-C.

Not a fan of lemon and salt? Here’s another one you can use. Lemon juice with tartar sauce.

Mix the two together in a bowl and dip a washcloth in the mixture. The lemon’s citric acid and the tartar sauce combine to make an abrasive, acidic mixture.

This way works better than metal scrubs as it’ll prevent those pesky scratches on your beautiful stainless steel.

Many of you have heard this before but you’re wondering if it really works. Yes, it does.

If you’re a storeman in SAF, you’d have used this once yourself when the annual audit is coming.

Coca-cola is high in abrasive citric acid content and is amazing at oxidation. Simply drop your rusty stuff into a pail of coca-cola and let it sit for a day.

Take it up and clean it. Voila, it’s done.

It works best with the original coca-cola, and less effective with coke zero and coke lite.

Never heard of tamarind? I don’t blame you. After all, it’s not a very mainstream plant in Singapore.

However, the pea is high in acidic content and can help to remove rust effectively.

Simply boil some ripe tamarind in water, apply it on rusty spots and let it sit for a few hours.

Then, simply scrub the solution with the cloth. Just make sure you wash and dry the metal after to get rid of the tamarind solution, which is acidic enough to corrode the metal.

So there you go, 7 effective and, most importantly, cheap methods you can use to derust your precious metals.