The Real Difference Between Coke Light & Coke Zero in S’pore

Luxury Goods Fugitive Couple to Be Remanded for 1 More Week As Prosecutors Need...

Another HDB Fire Broke Out This Morning, The 4th HDB Fire So Far in...

Briton Who Refused to Wear Mask & Even Challenged the Police Fined $8,000

Over here in Singapore, you’ll notice something weird in many coffeeshops: we have Coke Zero and Coke Light, both of which contain no sugar (which means no calories) and tasting exactly the same.

And just for your info, I went to buy two of these to look at the ingredients, because for some reason, I couldn’t find it online.

Even the order of the ingredients is similar. Heck, even the arrangement of the words is exactly the same, down to every kerning, leading and tracking (at least based on what I see; I didn’t use a ruler to measure lah).

Now, have you ever wondered why there’re two varieties of the exact same drink?

Here’s your answer: Coke Zero is allegedly marketed for guys, and Coke Light is for the ladies.

Well, actually, this isn’t exactly a shocking revelation since it’s mentioned specifically in Coke Zero’s Wikipedia page that Coke Zero “is specifically marketed to men, who were shown to associate diet drinks with women”.

You see, in other countries, Coke Light is known as Diet Coke. In fact, other countries have many diet drinks—drinks that have no calories at all, unlike Singapore that only have a few of these.

Let’s just put everything into perspective: most guys wouldn’t like to associate themselves with the world “light” or “diet”, right? They want to be seen as manly, brawny and one who hunts animals with their bare hands and eats them raw (okay, hyperbole here but you get the idea). Drinks that have the word “diet” or “light” might make them look feminine in social setting.

But men are also health-conscious. The solution? Re-package it, take away the word “light” and use the word “zero”. Make it black because black is manly and dark (I’d think so).

Doesn’t it all make sense now?

Oh, just so you know, the tag line for Coke Zero is “Great Coca-cola Taste, Zero Sugar”, while for Coke Light, it’s “Light Taste, No Sugar”. And take a look at the fonts for the two brands.

Copywriting—that has to be one of the most underrated jobs in the world.

And in case you’re wondering if drinking these zero-calorie drinks would really lead to weight loss, you might want to watch this video to the end (and please subscribe to our YouTube channel for more informative videos!): 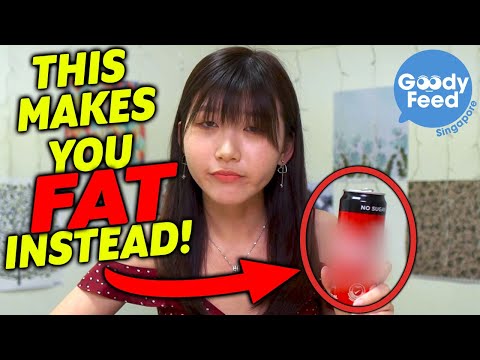