In this day and age of modern technology, gone are the days of trekking to libraries, poring over stacks of archaic books and journals in search of enlightenment.

Nowadays, the fount of all knowledge is simply a few clicks away.

Yup, that’s right. However dubious its information may be, Wikipedia’s always got your back.

And no matter how much your teachers nag at you not to use Wikipedia as a source, we just can’t seem to stay away from it. After all, while we can’t cite directly from Wikipedia, we can cite from Wikipedia’s sources #protip

Have you ever wondered, however, what are the most-viewed Wikipedia pages? What areas of knowledge the collective braincells of the world have decided to feast upon?

If you’re sick and tired of reading, here’s a video we’ve done on this topic. Watch till the end to understand why the adult website got into the list: 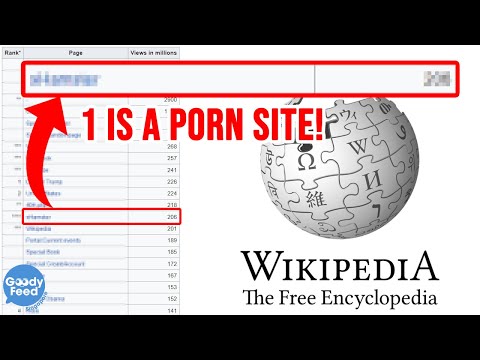 It’s no surprise that the Wikipedia pages of celebrities would be stalked by adoring fans or simply curious individuals who wish to get a glimpse into the lives of some of the hottest stars to tread this earth.

Coming in at number 7 on the list we have the King Of Pop himself—Michael Jackson, who ranks first among all singers.

Following close behind at number 9 and number 10 are Lady Gaga and Eminem respectively, while Justin Bieber comes in at number 17.

Of course, world leaders dominate a rather significant portion of the list. At number 1 on the list we have none other than Donald Trump, former US president and certified enigma (as seen from his Wikipedia page’s whopping 226 million views). He is officially the first human being to reach 200 million views.

Barack Obama comes in at number 3 on the list, with his Wikipedia page garnering 152 million views.

And as for current US president Joe Biden, he’s number 62 on the list, tied with Scarlett Johansson and Tom Cruise at 75 million views.

Ah, we’ve now reached the part of the article you probably clicked on the headline for.

Scouring through the top 100 list, we’ve come across some… questionable Wikipedia pages that were probably explored by the rest of the world within the safety of incognito mode.

R.I.P to all the animal lovers who Googled the site’s Wikipedia page wondering if it was some sort of club for hamster enthusiasts.

However, it should be noted that Wikipedia mentioned that there were many “automated views” for this page, so it’s not officially included in the ranking. Maybe AIs are searching for adult sites?

We choose to believe that the popularity of these pages is the work of some inquisitive seekers of knowledge or biology enthusiasts hoping to learn more about… natural reproductive processes. Yup, that has to be it.

You’d be surprised to know that Singapore is on the list as well, taking the number 83 spot with 70 million views. It seems that our little red dot is increasingly becoming a source of interest for the rest of the world, whether it’s due to Crazy Rich Asians or the 2018 North Korea–United States Singapore Summit.

Darth Vader comes in at number 29 with 91 million views, just below Dwayne Johnson with 93 million views. Indeed, the famed Star Wars character seems to be quite the marvel.

Sharing the number 69 spot with the Duchess of Sussex Meghan Markle, Queen Victoria, Jennifer Aniston, Ariana Grande, and Mark Zuckerberg is none other than literary legend William Shakespeare himself, who continues to hold his own in post-mortem glory.

Although his popularity on Wikipedia could simply be due to desperately clueless Literature students attempting to unravel the literary significance of their set texts.

Continuing the theme of academia, we have the Periodic Table at number 93 with 67 million views. Shoutout to all the non-Chemistry-inclined students who haven’t yet figured out that no, the Periodic Table isn’t a timetable of their class periods in school.

And finally, we can’t forget the phenomenon that has swept the entire world (and Wikipedia) off balance in the past year.

That’s right, the COVID-19 pandemic comes in at number 58, with an accumulated 76 million views as of writing. The race to understand this disruptive virus is clearly evident, and according to Wikipedia itself, COVID-19 is “the biggest phenomenon Wikipedia has ever known”.

After all, the page didn’t even exist in the beginning of 2020, but now has staked its position in the top 100 list.