Netflix Chief Content Officer Just Confirmed that There Will be a 2nd Season for...

Dream Cruises Suspends Bookings for 2 Weeks After Its Parent Company Filed to be...

Apart from the occasional snake at a carpark and wild boar at an MRT station, Singaporeans rarely come into contact with wild creatures.

We city-dwellers are used to stray cats roaming the streets and pigeons cooing in the skies, but we’re not exactly zoologists.

This is why we’re bound to stumble upon an unknown creature every now and then when we venture out of our homes and into the wild.

And by wild, I mean Pasir Ris Beach.

A netizen visited Pasir Ris Beach recently and came across a washed-up mystery creature on the sandy ground.

Puzzled at what he was looking at, the netizen snapped a picture and uploaded it to Reddit, where all the mysteries of life are solved.

To me, this looks like a big stone covered in wet algae. Fortunately for both of us, I’m not a certified marine biologist.

The good thing about asking questions on the internet is that because hundreds or thousands will come across your post, at least one person will have an answer.

And that’s exactly what happened here.

While some joked that it was an underwater tutu kueh or a land mine, one netizen came to the rescue with the actual answer: a carpet anemone.

According to Wild Singapore, Haddon’s Carpet Anemone is commonly seen on the shores of beaches here.

It stretches 40-50cm in diameter when fully expanded, but can grow up to 75-80cm. It’s bigger than the average human face.

As for the Tiny Carpet Anemone,  they are usually found in Chek Jawa Wetlands and Changi beach.

Only 2-6cm in diameter, it’s sometimes mistaken for babies of bigger carpet anemone.

Some Netizens Regretted Zooming In

When we come across something mysterious, it’s only natural to want to zoom in and have a closer look.

Netizens who did this soon learned that they’re suffering from a severe case of trypophobia as the image showed a large cluster of tiny holes.

According to WebMD, people with trypophobia have a strong physical and emotional reaction whenever they see patterns made up of holes or spots. The bigger the cluster of circles, the more uncomfortable they feel.

And this was a particularly big cluster of holes.

Because Goody Feed likes its readers, we will not post the zoomed-in image here. But you can tap here and zoom in if you enjoy getting creeped out.

While the mystery of the unknown Pasir Ris creature was solved, some netizens now have goosebumps on their body.

Was it worth it, I ask you?

To know why we have trypophobia, watch this video to the end (if you can): 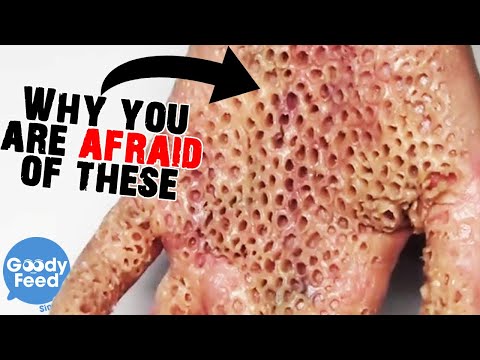