If I can sit down on a coffeeshop, I’d have gathered my kakis down for a drink and discuss possible solution for this pandemic.

“You know, disinfectants can kill the coronavirus,” my friend Bo Liao said.

“Oh wait, I think I might have a solution. Anyone got WHO number? I need to tell them about it.”

“You see, disinfectants like bleach right, it can kill the virus,” I said with my eyebrows furrowed to show my friends that I’m thinking hard. “If we can rub bleach in the lungs, then that’d be a game-changer.”

“Good idea! But how do we get the bleach into the lungs?” my friend De Ren asked.

“That’s the problem. I need to find a solution for that.”

Unfortunately, I can’t have that conversation now.

No, it’s because I’ve no friends.

But anyways, this conversation might have happened in your household for a good laugh, but believe it or not, a world leader actually said something along that line.

In fact, he even had a suggestion for the problem I’m facing during my conversation with Bo Liao De Ren.

When you’re cooped up at home and have watched all the millions of hours of shows in Netflix, you’d turn to YouTube to binge-watch videos there.

Reader Bao: You just linked your channel and embed a video, and that’s still not plugging?

No, because I’m going to introduce another channel for you.

If you’re like me, you’d watch the daily White House briefing by the most powerful man in the world, Mark Zuckerberg Donald Trump.

Other than updating his citizens about the latest updates on COVID-19, you can also see how he handled questions by the press with an iron fist, and how he praised himself even when the situation looks gloomy.

Occasionally, you’d find some nuggets of information that are as unhealthy as nuggets.

Like how he suggested using hydroxychloroquine, an anti-malaria drug, to treat COVID-19, which was shot down by medical experts because it’s too strong.

But people still believed it and a man died after ingesting it.

And today, Trump talks about disinfectants.

Now, it should be noted that he’s merely suggesting it, but when any POTUS speaks, even his body language and where he looks would be scrutinized, so you can bet that his words, no matter how ridiculous, carry more weight than your uncle who anyhowly forward fake news.

It’s this conversation that got everyone talking. 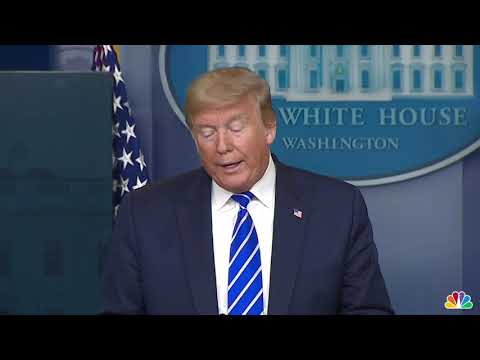 During the briefing, after a Homeland Security official mentioned the ability of disinfectants like bleach to kill the coronavirus on surfaces, Trump got interested and started to ask him more questions.

He said, “And then I see the disinfectant where it knocks it out in a minute. One minute. And is there a way we can do something like that, by injection inside or almost a cleaning?”

He then went on, “Because, you see, it gets on the lungs, and it does a tremendous number on the lungs. So it’d be interesting to check that. So that you’re going to have to use medical doctors, but it sounds—it sounds interesting to me.”

I’ve another suggestion: why not check out how to pluck the coronavirus out from the lungs using chopsticks?

Of course, no one said anything during the briefing because when your boss talks, you should only do two things: listen and nod.

Soon after, medical professionals started to give their take:

As a physician, I can’t recommend injecting disinfectant into the lungs or using UV radiation inside the body to treat COVID-19. Don’t take medical advice from Trump. https://t.co/YcZXJXfSxu

And of course, the guy Trump would be facing in the November election also came out to speak about it:

A doctor, Dr Vin Gupta, who’s also a pulmonologist and global health policy expert, slammed the President’s action, saying, “This notion of injecting or ingesting any type of cleansing product into the body is irresponsible, and it’s dangerous…It’s a common method that people utilize when they want to kill themselves.”

And because it’s on national TV and by the head of state?

“It’s exceptionally dangerous…There’s people who hang on to every word of the president.”

Now let’s hope we won’t see a report of people dying from drinking bleach in the next few days.