Overturn any object in your house; chances are, you’d find yourself looking at a “Made in China” label. When this phrase pops up, we’d often associate the object as being of low quality or low price.

After all, China is known for its uncanny ability to reproduce (not only children but also objects).  Notable mockups include Weibo (our Facebook), and WeChat (our Whatsapp). But did your know they have an Instagram as well?

Xiaohongshu (小红书), which translates to Little Red Book in English, is a social media and e-commerce platform that allows people to post, discover, and share various products worldwide.

The app has over 300 million users (yep, eight zeroes), similar to Twitter. It’s a surprise how we haven’t heard of it before.

Over 90% of the app’s users are female, and it is mainly used by fashion influencers and their followers. Thus, the app’s content is beauty-centric.

Apart from its aesthetic side, there are also travel bloggers who post tourism and leisure destinations on there.

The origin dates back to almost a decade ago. In 2013, founders Miranda Qu Fang and Charlwin Mao Wenchao started the app as an online tour guide for Chinese shoppers.

They wanted to provide people the opportunity to share their shopping experiences with the community and thus: Xiaohongshu.

In terms of their academic history, Miranda studied Arts and Science at the Bejing Foreign Studies University, while her counterpart has a Master’s degree in Business Administration from Stanford University.

A complement of skillsets, they quickly propelled the app into fame in China.

How Does the App Work?

When you first enter the app, they ask for your gender, age, and interests. Afterward, content is curated to your liking and displayed in either photos or videos.

Content is first shown on a large board, and you can click on posts that interest you. Then, similar to TikTok, you can scroll up and down to explore more. Finally, to view a user’s profile, you can swipe left and right on the piece of content that you are viewing.

For example, if you’re looking at world cup news, here’s what your feed would look like. 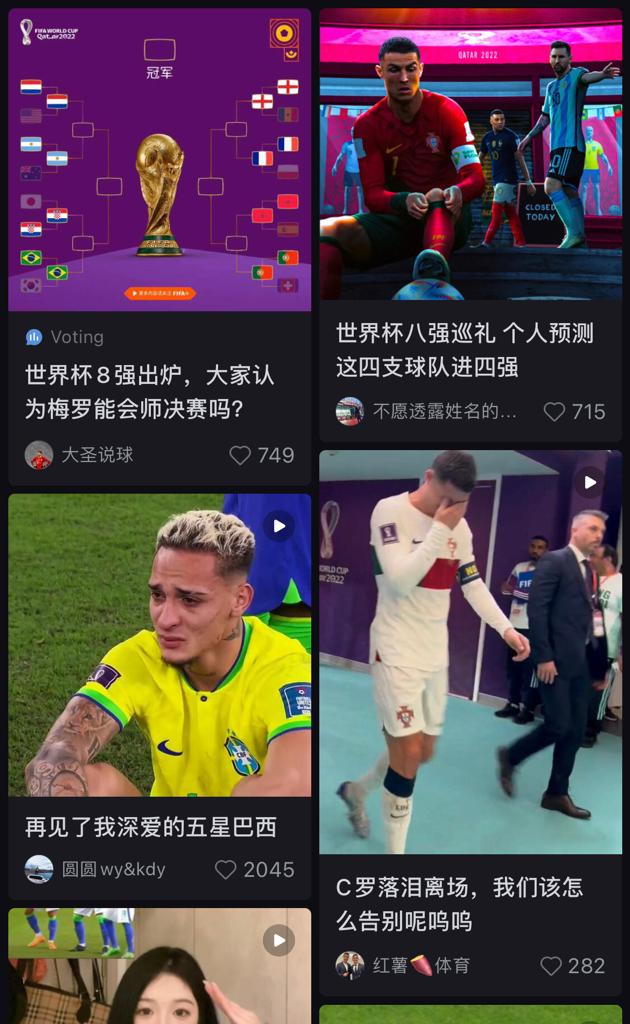 Then, you can click on a video and view it on full screen. 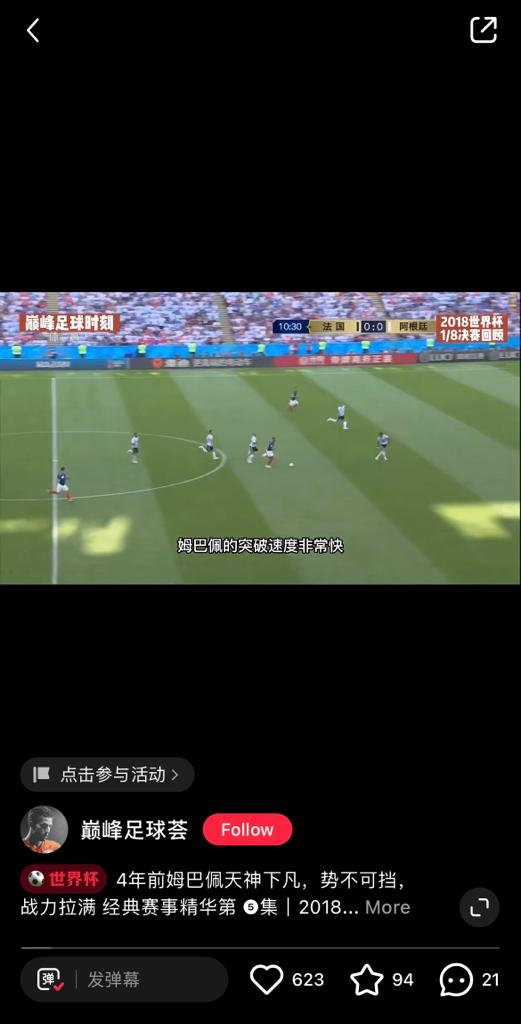 Apart from viewing content, you can also interact with other users using the message function and post your content. However, you must be a registered user to do that.

No startup could ever get this successful without a bit of funding. That includes Xiaohongshu.

With a booming app like this, investors are sure to be attracted.

The company’s newest round of financing in November 2021 raised $500 million, with Temasek Holdings being the leading investor (the exact figure is undisclosed). Yes, that’s right, Singapore has a slice of this pie.

In its history, it amassed around $920 million in funding, giving it a valuation of around US$20 billion (~S$27 billion).

Simply put, investors poured in nearly a billion dollars, and the company is now projected to be worth US$20 billion in the future.

By now, we should all know Xiaohongshu is a tech company. Do you know what that means?

If you thought of layoffs, then you’re right.

You can watch this video to know the reason behind the tech layoffs:

Like Amazon, Twitter, and other tech giants, Xiaohongshu has also let go of many employees in this turbulent time. In April 2022, it retrenched 10% of its workforce.

Although the exact figure wasn’t confirmed, the company has more than 2,000 employees in Shanghai, Beijing, and Wuhan, meaning that the number of layoffs is in the hundreds.

Dismissing the event as an anomaly, the company announced that the exercise was “normal HR optimisations.”

They also ensured that “affected employees (were) given a buffer period” before they were made to leave.

Unfortunately, this wasn’t what the employees had to say.

Some Chinese social media who claimed to work there said they were made to leave the same day they received the notice.

“I was dismissed. I thought Xiaohongshu was on the rise. But like a bolt from the blue, I was asked to leave the same day they dismissed me, I didn’t even get my year-end performance bonus. I’ll delete Xiaohongshu from my phone,” a user commented on Maimai, China’s LinkedIn equivalent.

With the technology’s growth comes the rampant spread of fake news, and Xiaohongshu is no different.

In recent years, the app has faced much backlash regarding the authenticity of its content.

In October 2021, Xiaohongshu was slammed for allowing heavily filtered, stylised photographs and imagery to be posted on their platform’s feeds. They then issued a statement on WeChat to acknowledge the problem.

Addressing the issue, they said that because “bloggers did not clearly label their works as creative photography, people interpreted them as part of travel guides. Users who visited the locations were disappointed by the differences between their expectations and reality”.

In December of the same year, Xiaohongshu formed a dedicated team to identify and remove fraudulent content.

Following that, the company sued four companies on January 2022 for several ghostwriting broker sites. They asked for US$1.57 million in damages for a bruise to its reputation and the infringement of consumer rights on its platform.

Unfortunately, the backlash didn’t end there.

Since the app demographic was mainly women, there was still much potential to be unlocked.

“Beautiful ladies are all here on Xiaohongshu, free to see, without spending any money!” a tagline on a sports forum read. Another ad on the forum site Baidu Tieba read, “Sexy, beautiful car models and stylish beauties are waiting for you!”

While the company has continued to grow, the user base remains female-dominated.

In an interview with the Boston Consulting Group in Greater China, Miranda explained the philosophy behind the company’s success.

Explaining Xiaohongshu’s rise, she said the “most important factor (was) strategy,” quoting Sun Tzu’s The Art of War, saying that “attacking the enemy’s strategy is the best choice.”

In the volatile landscape of the world, she developed a three-pronged approach to success.

Firstly, the company had to remain adaptable and cater to every aspect of the multifaceted world.

Next, they had to be organised. In other words, they had to have the correct company structure and “attract the best minds” for the “organisation’s vitality and strength.”

Lastly, Xiaohongshu optimised member’s individual strengths for everyone to each perform a specific role at its best.

Using this formula, the company was built from the ground up; the rest is history.

More about the Xiaohongshu

Xiaohongshu’s headquarters are in Shanghai, but it also has warehouses in Shenzhen, Guangdong, and Zhengzhou, Henan.

In 2014, they focused on bridging China with the rest of the world, and hence, RED Mall.

Before this, Chinese shoppers, if they wanted to purchase items from other countries, could only do so by physically travelling there or buying through a daigou. A daigou is a professional shopper who buys items on behalf of other people and then ships them their things.

But now, shoppers can buy the items themselves.

If you’ve been watching sports lately, you’d probably know that China isn’t in the World Cup.

But did you know, Xiaohongshu still has a part to play in it?

Xiaohongshu signed sponsorship deals with Belgium and Spain’s national football teams. In return, both teams shared their highlights on the platform, including behind-the-scenes preparation and their personal stories.

World Cup aside, they have partnered with famous football clubs like Manchester United, Barcelona, and Juventus to cater to the increasing appeal of sports-related content on the app.

Seems like they’re not giving up on attracting male users.

By now, you should know enough about China’s Instagram-equivalent. Try downloading it!

Over here in Singapore, the Chinese-speaking community uses it more often, but hey: That was how TikTok started, too.