Lawrence Wong Said He Might Give $3,000 Ang Pao for Each Staff Member for CNY

Chinese New Year is approaching in about a week’s time.

The festive period is a time where we gamble, feast, and receive ang baos (red packets) to our heart’s content.

If you’re the one having to give out ang baos instead… whoops.

While we commonly receive ang baos from our parents, grandparents, and relatives, bosses also tend to give them out too. It’s a sign of appreciation for all the hard work from employees.

To the employees of this boss though, you’re in luck as y’all may be getting a really fat ang bao this year.

Lawrence Wong Said He Might Give $3,000 Ang Pao for Each Staff Member for CNY

In a recent episode of #JustSwipeLah, Lawrence Wong appeared alongside veteran actress Xiang Yun and Dasa Dharamahsena. They were promoting their film Reunion Dinner.

Reader Bao: Wait, did you just—

Xiang Yun mentioned that she would include S$5, S$10, S$20 in each ang bao as a “token of appreciation”.

When host Juin Teh directed the question to Wong, his reply caught others off guard. He replied, “This year… I might have earned a little more. Maybe each person can get S$3,000?”

Upon hearing his reply, Juin and Das’ jaws immediately dropped. Mine, too. They even joked that they wanted to work for Lawrence.

But seriously though… where do we go to sign up to be his employee? Asking for a friend. *coughs*

Xiang Yun, on the other hand, agreed with Lawrence’s decision. She said that “Yes, when you earn more, it means everyone worked hard alongside you.”

Das also chimed in during the conversation. His experience was rather fun and exciting.

He mentioned that his boss would usually prepare ten red packets for employees to pick. “If you’re very huat that year, you would get S$500”, he mentioned.

And if you’re not so lucky… you may get S$2. In another country’s currency.

And by the way…lest you’re not aware, he used to work in NOC, so you can probably guess who the boss is. In fact, they even did a video about that before.

All jokes aside, red packets do hold a very significant meaning regardless of the amount. It is to symbolise good luck and prosperity in many Chinese cultures.

You can watch the video here: 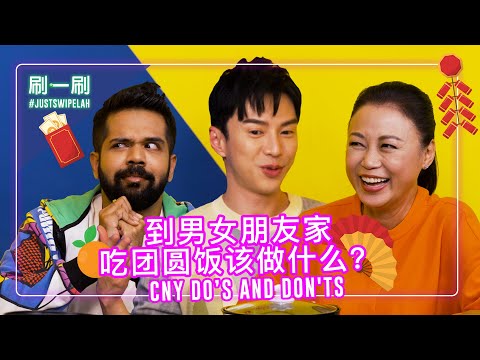