Driver Slowly Reverses into Woman Who Was Chope-ing Empty Lot; Woman Then Threatened to File a Police Report

While the passion for “chope”-ing seats in hawker centres with packs of tissue and our staff passes is probably something that runs in every Singaporean’s blood, I’m pretty sure most of us wouldn’t try and “chope” some things.

For example, parking lots. With our bodies.

But it seems like recently, a woman did just that, and was caught on camera for doing so.

Recently, SG Road Vigilante, a group where local motorists and drivers get together and post snippets of unreasonable moments that they spot while on the road, posted this video on their Youtube account and in their Facebook group. 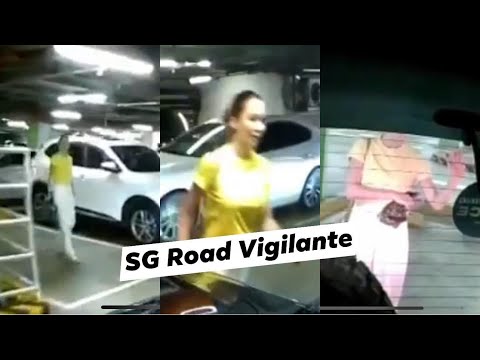 Yes, she tried to chope a parking lot by just standing there.

Clearly, that’s not how things work.

According to the caption, the incident took place at the car park at Marina Bay Sands (MBS) on Sunday (15 May).

Another driver, who caught the incident on his car’s dashboard camera, tried to park his car in the lot, because it’s pretty obvious that car parks don’t abide by the same “chope” rules as hawker centres do.

While he was trying to park his car, the woman repeatedly waved her hand in a “no” signal and even started tapping the back of his car when he continued to reverse his car.

Based on the driver’s account, the woman was trying to save the lot for her husband who had not reached yet.

“I insisted that we should get the security but she said she will report it to the police, she proceeds to walk away and said i will see you next week,” the driver recalled.

The argument ended with the woman giving the parking lot up to the driver.

Apart from raising the fact that hawker centre “chope”-ing rules do not apply in car parks at all, others also noted that she may have caused herself to be a safety hazard.

In particular, the fact that she was standing in the middle of a car park and refused to let others drive might have caused much danger since drivers may not have noticed her.

This is due to the fact that car parks usually have dim lighting and that drivers’ visibility is limited due to the vehicles that are parked in the car park.