Images are doctored all the time.

However, it does take an impressive amount of courage to use a Health Minister as your product spokesperson, without their explicit permission.

Yesterday (26 Apr), Health Minister Ong Ye Kung took to Facebook to declare that he’s been made aware of the fact that there are doctored photographs of him endorsing certain medical products online.

He asserts that Ministry of Health (MOH) officials and political appointees are not allowed to endorse any medical products, for fairly obvious reasons.

Mr Ong adds that the Ministry will be working with Facebook Singapore to remove the misleading and unauthorised posts.

He then warns the netizens to be wary, and to not fall for such false advertising.

There are at least two separate images of Mr Ong advertising different products.

The first photo was from 2019, taken during the award ceremony at National University of Singapore’s Yong Lin School of Medicine.

In the original photo, he was presenting an award to Dr Oon Chiew Seng, who was given the Alumnus of the Year Award for her contributions to the Obstetrics and Gynaecology specialisation and her philanthropy work in setting up the first nursing home for dementia patients.

The award, however, was replaced with a bottle of medication. 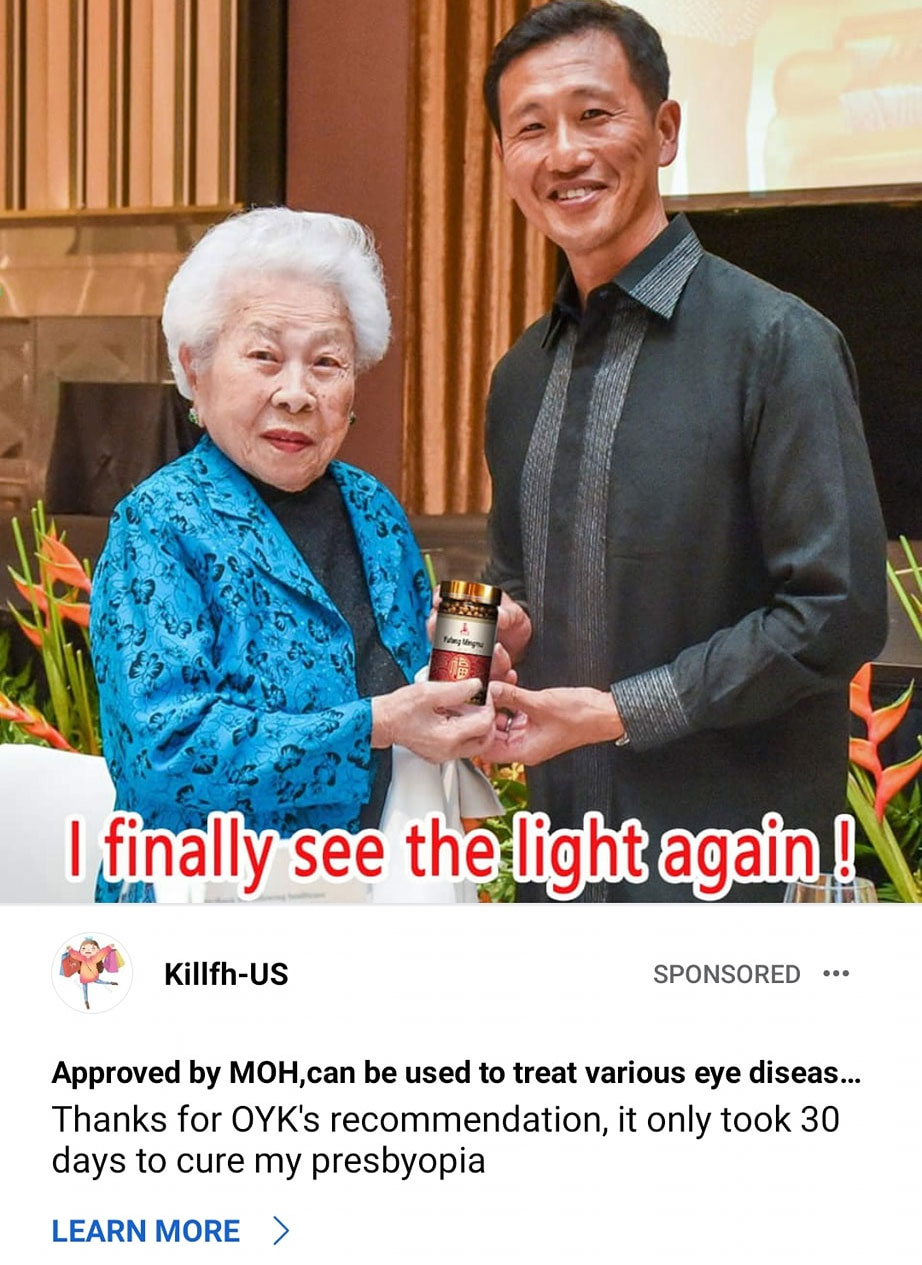 First of, whoever did the doctoring did a subpar job, because they clearly didn’t take lighting into account when they were editing in the bottle of medication.

Secondly, it’s nearly impossible to make out the branding on the image. What kind of terrible advertising is this? It could be Mee Sua’s Essence of Chicken Soup for all you know.

The post claimed that the medication could cure presbyopia in thirty days.

Presbyopia is a condition associated with ageing, where eyes gradually lose the ability to focus on nearby objects, or in simpler terms, far-sightedness.

It tends to manifest around the early to mid-forties and continues to worsen until around the age of 65.

It’s an unavoidable condition of ageing, and it’s preposterous to think that it can be cured within thirty days through medication. There are no such miracles in the world, besides prescription glasses.

Furthermore, the caption of the post “I finally see the light again!” makes it seem like it’s curing blindness instead of presbyopia, but it can be assumed that the effect of the medication is the same…

By which I mean it’s a sham and completely useless.

The second photo was taken recently in March 2022, when Mr Ong went down to Kuala Lumpur for a business trip to meet Malaysia’s Minister of Health Yang Berhomat Tuan Khairy Jamaluddin.

The 352-page-long book, In This Together: Singapore’s COVID-19 Story, which was published by The Straits Times, was replaced with an envelope-shaped object with Chinese characters on it. 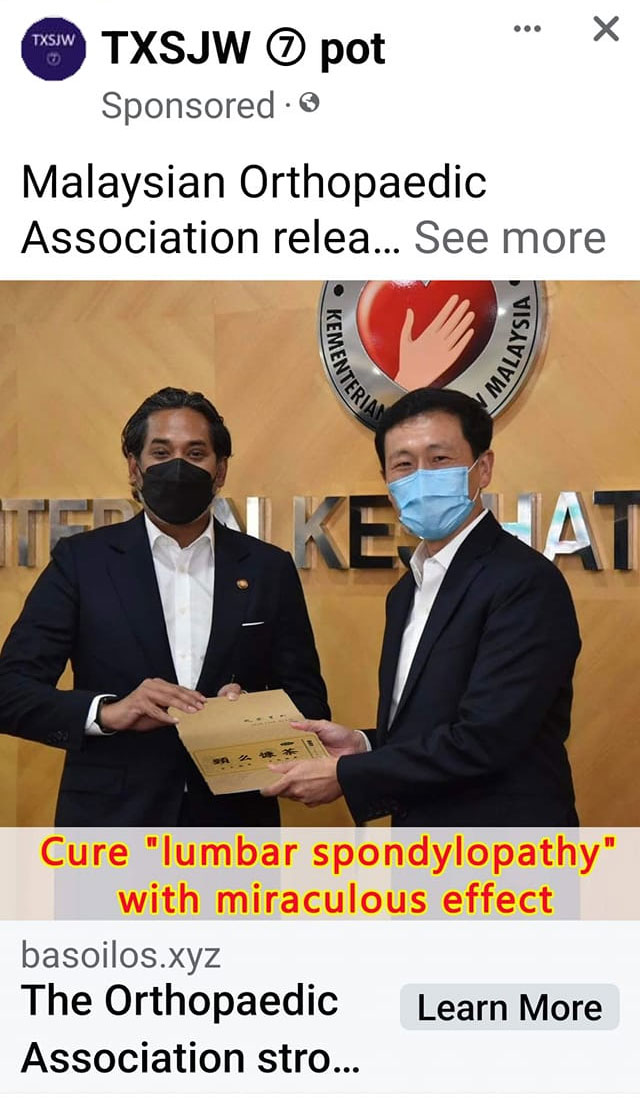 The photoshopped envelope was well-done, but the backdrop really gives it away because the logo reads: “KEMENTERIAN KESIHATAN MALAYSIA” (Ministry of Health Malaysia).

A Chinese man handing an envelope written in Mandarin to a Malay individual, in government headquarters, really?

Put up a green screen and change the background at least, come on.

The funniest part would be the description though, as it states “Cure ‘lumbar spondylopathy’ with miraculous effect”.

Spondylopathy refers to disorders of the vertebrae, or of the spinal column.

The only miraculous effect here is that it will have the audience in laughing fits as they take in how ridiculous the doctored images are.