Funerals are the last tribute the living can pay to the dead.

It’s usually a sombre affair with tears and long eulogies, chanted sutras and religious texts in hopes that they have a good afterlife.

On occasion, you’ll witness touching send-offs, like the family and friends who spared no expense in dressing up in Star Wars-themed costumes to ensure that their brother and friend returns to the Force as he would have wanted.

For Sunny Low, the ballroom dancing legend, perhaps there is nothing more fitting to represent his entire life and legacy by dancing the traditional cha cha at his funeral.

Spontaneous Cha Cha Breaks Out at the Funeral

He died of a brain haemorrhage in the hospital around 4pm, leaving behind his wife, four children, seven grandchildren, and seven great-grandchildren.

His death was shocking to his family and the dancing community because he was not in poor health.

Far from it. In fact, just three days before, Mr Low had been teaching a 90-minute class on Ballroom and Latin dance to 15 students.

No matter how much his large family missed and mourned for him, they knew his passion and love for dancing.

That he would have wanted his family to be happy.

So instead of dragging their feet around, a spontaneous Cha Cha session broke out at his funeral late at night, with his 67-year-old wife standing at the front and centre to take the lead.

She is joined by his siblings Betty and Lawrence, his sons Melvyn and Jolvyn, daughters-in-law Nancy and Cindy, as well as his grandchildren.

It’s a beautiful moment of unity and coordination from the Low Family; the very manifestation of his legacy in a patter of delicate footsteps and artful spins, surrounded by the people he has impacted, who loved and respected him in return.

It’s the last encore; a kiss goodbye to the dancing legend while he takes a graceful bow out, the white curtain closing on his casket. 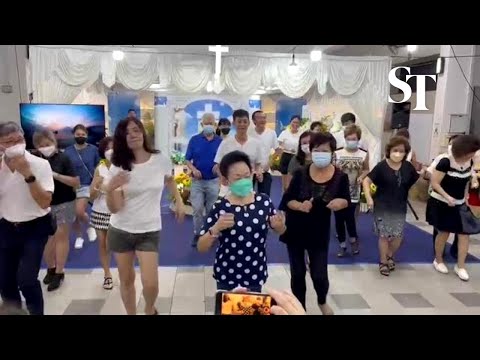 In Memoriam of Sunny Low

Larry Lai, who has been friends with Sunny Low since their secondary school days remembers that Mr Low was always a cheerful person with a sunny disposition.

It can be imagined that Mr Low grew up around dancing; he lived in an Outram shophouse ever since he was young, and it was also home to Poh San Dance Studio, which was set up by his father, Low Poh San in 1937.

Mr Low started dancing when he was 14 and was eventually crowned as the King of Rock ‘n’ Roll in a dancing contest in 1957.

He met his wife Aleena Tan at the dance studio in 1969.

She became the lead dancer in his dancing group, the Sunny Low Dancers, as he scouted for talents, so they could perform on stage and television.

The pair set up the Sunny Low Dance Studio in 1986 together and got married in 1989.

The power couple went on to become the founding members of the Singapore Ballroom Dance Teachers Association, a move that placed the country in the global dance scene when it attained membership affiliation with the World Dance Council in 1991.

For a brief period of time, he was the choreographer for Hong Kong broadcasting company TVB.

His granddaughter, Tasha Low, shared his life story and how much he had impacted the people around him on Instagram on Wednesday (11 May).

She recalls the memories with him fondly: the trips out to grab his favourite desserts, how he had been a source of inspiration to her, which led her to pursuing her own dancing career in Korea.

She thanks him for his love, his affectionate kisses, and for being the grandfather that the grandchildren needed.

Tasha Low had clearly taken after her grandfather well as she used to be in the now-defunct Korean Girl Group Skarf. She has also made an appearance in Jack Neo’s movie “The Diam Diam Era”.

Mr Sunny Low, you will be dearly missed.

His family has also made a video about his life in memory of him, which can be viewed on Facebook.