Crash Landing On You: 10 Facts About This Korean Drama That’s Streaming in Netflix

2 Men Fought at JB Checkpoint After JB Car Hesitated on Which Lane to...

If you’ve like me who has binge-watched the Korean drama Crash Landing On You in Netflix, you’d be reminded of another drama.

In 2016, we were treated to Descendants of the Sun, a Korean drama that did more than just captivate an entire nation;

It revolutionized the entire military industry.

All of a sudden, military service was relevant. Men and women alike looked towards the military with newfound respect, and enlistees were suddenly striding into camp with an unprecedented bravado.

And needless to say, captains everywhere began walking with their chest out and butt tensed, ala the Big Boss Captain Yoo.

Truly, it was a revelation in itself. Not the butt tensing, just the whole affair, you know?

We even reenacted a scene for a branded video: 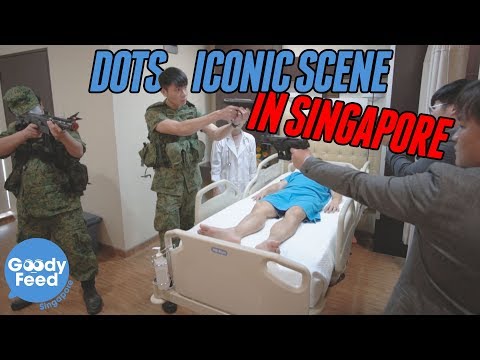 Alas, the military craze has somewhat died down, what with the SongSong couple’s rather nasty split from each other and the dreariness that enlistment naturally presents.

Notwithstanding the announcement of a DotS 2, it’s safe to say that military fever has reached an all-time low.

Crash Landing On You.

But what makes Crash Landing On You so irresistibly appealing, as the legions of CLOY fans worldwide would attest to? And why exactly did Goody Feed refer to it as the ‘Second DotS’, apart from the fact that it would make a real click-bait headline?

The Basic: The (Overused) Plot

First and foremost, let’s start with the basic of all basics: the story line.

Though no worries, there’s no spoilers here.

Essentially a twist on the age-old Romeo and Juliet trope, Crash Landing On You tells the story of two star-crossed lovers, Yoon Se-ri (played by Son Ye-jin), a South Korean heiress, and Ri Jeong-hyuk (played by Hyun Bin), a member of the North Korean elite and captain in the army.

Notwithstanding their vastly different cultural statures and positions, they meet under the unlikeliest of circumstances: a forest in the DMZ in North Korea, where Se-ri had been blown off-course by a freak tornado while out for a short paragliding ride in Seoul.

In other words, she crash landed on Jeong Hyuk.

Jeong Hyuk, against his better judgement, would give Yoon Se-ri shelter as he develops plans to sneak her back to South Korea.

However, the scriptwriter’s dreaded South Korean TV tropes swiftly strike, and the pair soon find themselves deeply in love despite their earlier and rather obvious enmity. As fate intervenes and deals multiple cards that would’ve made Cupid proud, the star-crossed lovers must overcome all odds to seek what they’ve been constantly looking for: each other.

For a more appropriate synopsis, you may check here.

Crash Landing On You was a fan favourite even from the early stages. According to Wikipedia, it was the fourth highest rated K-drama for the first part of its run.

After its final episode on 16 Feb 2020, Crash Landing On You officially boasts a remarkable 9.1 rating on MyDramaList, as well as a 5-star approval rating on Google. It also holds a spectacular 9.0 rating on iMDb.

The drama has also proven a real hit outside South Korea, with many A-List celebrities in Indonesia, Malaysia, Philippines and Thailand confessing to “binge-watching the drama”.

Apart from South Korea, the drama was also filmed in Switzerland and Mongolia.

Despite its premise, Crash Landing On You did not utilise North Korea as a filming location. All makeshift landscapes were re-created in places such as Jeju in Korea, amidst other locations.

I mean, you do know that, right? These iconic steps didn’t mean that South Koreans could just step into North Korea for a drama:

According to Soompi, the series finale of the hit drama set a new record for the highest viewership ratings in tvN history, with an average nationwide rating of 21.683 percent and a peak rating of 24.1 percent.

The previous record was set by Goblin back in January 2017, when its finale achieved a peak rating of 20.5 percent.

Crash Landing On You is now the second-highest rated drama in South Korean cable television history, with a peak AGB Nielsen rating of 21.7 percent.

Sky Castle, a drama about South Korean “tiger mums”, is in first place having achieved a peak rating of 23.8 percent in February 2019.

And lest you’re not aware, Sky Castle is also available in Netflix.

As amazing as Crash Landing On You’s backstage work was, the drama’s success still owes partly to its magnificent ensemble of actors. Lest you’re wondering, the cast list is situated as such (scroll down and continue reading if this doesn’t interest you; it sure doesn’t interest me):

People in the North Korean village

Since its premiere, Crash Landing On You has been lauded “for its portrayal of everyday life in the North, even down to accents and words.”

North Korean defectors, too, have given the drama’s set-up positive reviews, with a professor at Chungnam National University noting that the series “changed the stereotypes on North Korea and candidly showed that it too is a place where people live.”

Yet, notwithstanding its realistic portrayal, the degree of accuracy didn’t come without hard work. According to Wikipedia, the production of the drama proved to be “painstakingly meticulous”, owing to the country’s tense relationship with North Korea. Because the crew lacked a ” guidebook on multiple hurdles he had to hop over — skillfully and delicately – to accurately depict the country while dodging criticism”, they had to be careful not to misrepresent the state.

Kwak, who learnt film directing in Pyongyang and had been a member of an elite security force protecting the Kims, helped to craft the drama’s plot, and assisted in conceptualising the setting and scenes in the drama depicting everyday North Korea life.

According to North Korean defector-turned-YouTuber and reality TV celebrity Kang Nara, around 60% of the portrayal of North Korea is accurate.

“The richer families in North Korea like to show off their wealth by adding lace curtains to their windows. So that was pretty well portrayed,” she commented

As it turns out, the freak accident that left Yoon Se-ri stranded in North Korea might not have been a mere fictional gimmick.

According to The Straits Times, Screenwriter Park Ji-Eun drew inspiration from actress Jung Yang’s 2008 accident: the actress was sailing in Incheon when her boat was swept away due to harsh weather conditions, causing her to almost cross the 38th parallel…

The border between North and South Korea.

Also, here’s one real-life North Korean escape story that might spark similarities in comparison: back in May 2019, a refined prisoner by the name of Kim struck up an unlikely friendship with her stoic prison guard, Jeon.

They eventually fled the country when Kim was sentenced to four years, three months in the feared Chongori prison camp.

Crash Landing On You might be a fictional love story done exceptionally well, but as far as reality’s concerned, something else might be brewing.

Back in 2019, Hyun Bin and Son Ye Jin denied dating rumours not once, but twice. Having starred together in the Korean movie The Negotiation, rumours then surfaced that the two were travelling in the United States together.

Their agencies, however, denied the rumour. Later on, photos of the two grocery shopping together with other acquaintances surfaced, which prompted the agencies to refute rumours once again.

Just recently, dating rumours between the pair were renewed, after a sharp-eyed Netizen pointed out a BTS scene in which Son Ye Jin and Hyun Bin seemed to be holding hands underneath the table.

However, Hyun Bin’s agency has stated that Ye Jin was, in fact, holding her own hand.

On a serious note, it wouldn’t be a surprise if the pair did, indeed, get together. After all, one does not have to look further back than 2016 to find a startlingly similar case.

Though, considering how the 2016 incident turned out…

This could well turn out to be a blessing… or a curse.

Crash Landing On You might’ve won legions of fans around the globe, but its success didn’t come without controversy.

After the drama’s premiere, Crash Landing On You was accused of “glamorising” the reclusive state.

And that’s not all.

Police Report Made for the Drama

On 9 Jan, the conservative Christian Liberty Party (from South Korea, lest you’re wondering) filed a police complaint under the premise that the drama had violated National Security Law. It claims that the drama has only depicted North Korean soldiers in a “peaceful” way, and that South Korean citizens have been “incited” by the TV series.

“Our security law stipulates we should not sympathize with an anti-government organization that threatens the nation’s existence,” the statement reads. “We want the instigators to be promptly investigated and punished.”

Seoul Metropolitan Police Agency is currently reviewing the complaint, but many believe that the cable channel is unlikely to be punished.

“Fiction-based dramas have rarely been punished for breaking the security law,” a police agency official said.

Yah, why so serious?

Conclusion: It’s Worth a Watch

If you’re one who’s still on the fence on whether you should spend some time on this drama, here’s our gentle advice:

If you don’t want to laugh and cry loudly, then don’t watch it.