Wait, what’s that tune in the distance?

That’s right, your latest earworm and “army” dance is here in the form of the Ah Girls Go Army MV. And it’s very different from the Ah Boys To Men (ABTM) MV.

Target’s Not Beauty But Enemy!

Jack Neo just dropped the MV for the Ah Girls Go Army theme song! Just like every ABTM song, this is guaranteed to be replaying in your mind for days. They even have choreography!

You can watch the full MV here:

If you’re a die-hard fan of ABTM, you may notice that the Ah Girls’ theme song is quite different from the ABTM songs. You can refresh your memory of the first ABTM theme song first: 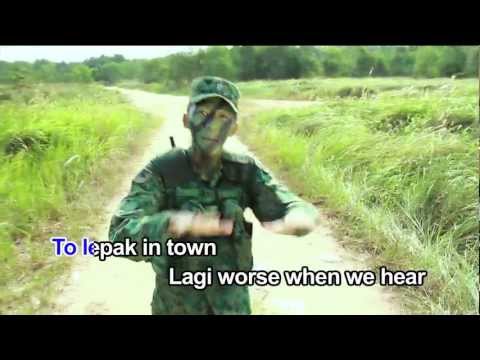 ABTM songs typically talk about the troubles and obstacles the boys face in NS, and has many inside jokes that all our NSF will relate to.

However, the Ah Girls’ song doesn’t really have much inside jokes (obviously, since girls haven’t had to enlist yet), so it may fall short in being relatable.

Instead, it talks about the girls swapping their makeup for camouflage cream, selfies and shopping for target practice, and… hanging your laundry properly? (I mean, even in HDBs, I don’t see people anyhow hanging their underwear… right?)

While the first ABTM theme song had people rapping like Tosh Zhang and proud to be serving NS, the Ah Girls’ theme song arguably doesn’t have the same effect.

OK lah, considering how they had to fully imagine the girls’ NS experience, it wouldn’t be fair to expect the same ‘relatable’ vibe we got from the ABTM franchise.

Well, at least we got some choreography to go with the song this time!

Ah Girls Go Army will explore a “possible near-future” where the local population has decreased so significantly that women will have to join the Army.

The movie predicts what might be Singapore’s first batch of female recruits: “a bunch of Gen Z teens with different backgrounds and education.”

After trials and tribulations, these girls will gradually warm up to the concept of National Service over the course of the movie.

You can watch the trailer here:

Can our Singaporean women step up to the challenge of defending our nation, the same as we ask of our men?

The Ah Girls says yes, but you can decide for yourself by watching the movie this Chinese New Year!