If you’ve driven on the road in Singapore, you may have noticed these tall poles with lights flashing in three distinct colours, one at a time.

Rumour has it that these strange structures, along with signposts, are meant to help traffic flow and prevent accidents from happening.

But many drivers view these structures and signposts as a sovereign might look at a face mask: a puzzling object whose purpose remains mysterious.

One such driver, behind the wheel of a red Audi, nearly slammed into a pedestrian after beating a red light in a video that has since gone viral.

And now it appears that the close shave has not gone unnoticed by the authorities.

A 34-year-old has been arrested for his suspected involvement in dangerous driving, in connection with the viral video.

The police were alerted to the video at 3:30pm on 30 Dec and launched investigations soon after. Their investigations led them to the 34-year-old driver and he was apprehended.

The man’s driving licence was also suspended immediately and investigations are ongoing.

The incident in question occurred at a road crossing in Lentor Avenue on 30 Dec. Footage of the incident appears to have been taken from the dashboard camera of another vehicle in the area.

In the video, the dashcam car slows down as it approaches a traffic light that is red. As is usually the case, this gives pedestrians an opportunity to cross the road without getting run over, which is nice.

One such pedestrian could be seen crossing the road at this time while using her phone.

Just as she was about the reach the other side, however, a red Audi comes out of nowhere and whizzes past the girl, missing her by three hairs.

The girl is startled at first, but carries on as if a pigeon had just flown past her. 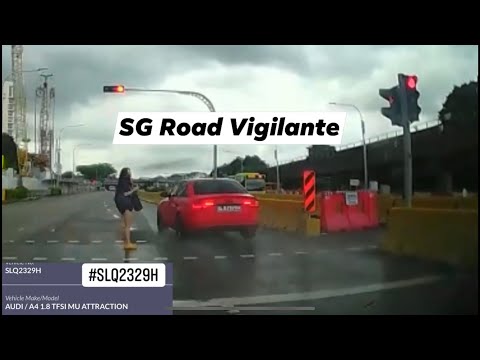 Can Be Jailed Up to 12 Months

If convicted of dangerous driving, the man can be jailed for 12 months, fined $5,000, or both.

A second or subsequent offence carries a two-year jail sentence and a $10,000 fine.

Those found guilty could also be disqualified from driving all classes of vehicles.

The authorities said the traffic police will not hesitate to take firm action against motorists who disobey traffic laws and endanger the safety of other road users.

So if you see a signpost or one of those strange structures on the roads with lights flashing, pay attention to it.